Dear Fellow TDTC Members,
For the past three years, you have afforded me the opportunity to be TDTC President. I will always be indebted for your trust, your confidence, your loyalty, and your hard work.
My sincere thanks to all the Members, Board and Committee members who over the years, supported the vision to paying off the building mortgage, adding the new agility room, the office, adding Rally to our program plus many other endeavors and projects. This does not include the numerous trials, classes and seminars we have sponsored.
Life is not measured by the number of breaths we take, but by the moments that take our breath away. I have enjoyed the many moments.
Keep those tails waggin’

These dates and shows are the best available information but they may not be accurate you should check them out.

If you want to retain your building key privileges for 2006 … you must turn in your Green Card by the end of January 2006. I would REALLY appreciate it if you would turn them into me earlier! And, PLEASE remember to lock the door and set the alarm when you leave the building. We have had several nights where the door was locked but the alarm wasn’t set so double check when you are ready to leave!

We are now accepting enrollments for all obedience classes for the Winter 2006 training session. Classes will start the week of January 9th and run for 10 weeks. Enrollment forms are available in the TDTC snack room or may be downloaded from our website at www.tulsadogs.com. As most of you know, our classes usually fill up well in advance of the first week of class. Just a friendly reminder to TDTC members, please do not wait until after the holidays to enroll–the class you want may be full by then!

Steve Bull/Sirius Photography will again take pictures at TDTC this year. They will be finished in time for your Christmas mailing. At the Annual TDTC meeting there will be a sign up sheet for scheduled times.
Cost: $30 per CD with many poses. You can then reproduce what poses you want. Other printed packages will be available.

TDTC will provide the meat, drinks, and eating utensils.
Please bring one of the following dishes, depending on the first letter of your last name:

We will be playing “Dirty Santa” after dinner. Please bring a $15 wrapped gift for each reservation that you make if you plan on joining in on the fun.

Report from the UKC Agility Trial

Once again thanks to everyone for your support in yet another successful event. Without those of you who continually volunteer to help at trials, we would be lost. My special thanks to Charles & Dianne Ree and Donna and Glen Key, as well as Bob Fewell for saving my neck on Friday with all of our last minute computer and set up problems, and Larry and Pam Scott for coming in late and cleaning the rings for us. Thanks to Ali Maurer for once again doing a great job in organizing all of the ring crew, and Jeri Hajek for bringing in the food.

Lots of club members also had great runs accumulating points towards UACH titles, and legs towards AGI, AGII, and the new GRACHX titles. Results are on the website.

Something to Brag About

I showed my dog, Max — a Golden Retriever, for the first time at the UKC show at the Club a few weeks ago. He earned his U-CD over the weekend. I’m not sure if it’s true, but I was told he was the only dog that earned all three legs of a title over the weekend.

Winnie had a great weekend at the Shawnee Mission Labrador Retriever Club Specialty Show in September. She took a High in Trial on Saturday out of Utility B with a 194.5, and a high combined on Sunday, missing HIT by 1.5 pts. This added more beautiful handcrafted pottery to her collection, as well as two more Utility 1st places.

Zoe and I attended the UKC Premier Event in June for All Stars in AgI and AgII and although we could have done better, we managed to qualify in both and came out in the top ten in the AgI and AgII classes. The rest of the weekend proved to be more productive with lots of ribbons and placements in most of the runs. It was a lot of fun and we really enjoyed spending time with Richard and Ramona Stanfield who were there with Susie and Shadow (Susie competed in the AgIII class of All-Stars). Zoe was one of twenty-four dogs to receive the new UKC title retroactively. The UGRACH, that is the United Grand Agility Champion, was earned on February 20, 2005. At five different UKC licensed agility trials, the team must earn a qualifying score in each of the Agility I-B, Agility II-B and Agility III in the same trial with a combined score of 588 points or higher. Two of the combined wins must be under at least two different judges. Needless to say, we were thrilled to receive this title, especially since we didn’t think it went into effect until after August 1, 2005! We are also currently in the top ten all-stars in UKC for Agility I, II and III for 2005.
Zoe and I did well at the K-9 dog club of Ponca City AKC Agility Trial, Oct 1-2, 2005. Out of four runs, we managed a double Q on Saturday with one first and one second place finish and a first place on Sunday in Standard to give us a total of 53 MACH points for the weekend. We didn’t do as well at the TDTC trial but still managed one clean run. At the SSKC trial, we came out with a 50% run average but should have done better. I found out some things about Zoe that I didn’t know before….like she would literally push me out of the way to get into the end of the tunnel that she wasn’t supposed to take! But we had a great time and are looking forward to competing in AKC next Spring after I have surgery on both knees to replace areas where I presently have no cartilage. We now have five double Q’s and 263 points towards our MACH title!
Zoe and I have discovered a new venue for agility in NADAC, thanks to Donna Key and her enthusiasm about it! We did really well at our first trial and it was so much fun to compete at the novice level again! We received three new titles and had a “Perfect Day” (when you qualify in all six runs in one day!) award as well! We attended our second NADAC trial in Guthrie and added two more new titles. After two more NADAC trials in September, we have managed to compete at the Elite level in both regular agility and jumpers. The courses are fast and flowing and Zoe just seems to dance around the ring! Needless to say, we have found another way to run agility and have fun at the same time!

Our mom, Mariann Duca, is really proud of us and was surprised when I won; but she was really shocked when Shasta won ‘cause she’s so hard-headed and stubborn. Thanks go to Aunt Sandy Fox for taking our picture. I know she’s really proud of us, too. Thank you also to Dan Fox, Chris Hatchett, and Cathy Hall for being such great instructors. 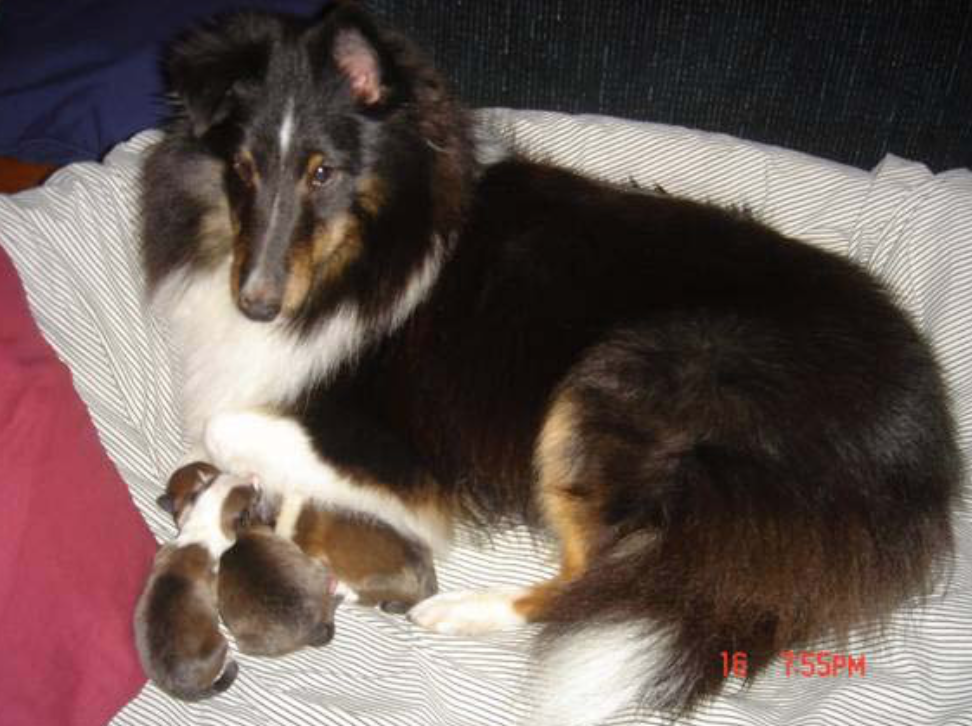 Announcing the newest members, I think, of the Tulsa Dog Training Club.

We will see you at agility!

Casey (Long Coat Chihuahua ) and I took the month of September off but October has been very busy for us. We ran at Ponca City, TDTC and Enid in AKC trials. We finished our Novice Agility Preferred in Ponca City and our Open Jumpers Preferred in Enid. We made our debut in NADAC at OK Paws trial in Shawnee. What a great time we had! We had 3 qualifying runs in Regular Novice to earn our NAC title. We managed to earn 1 leg in Novice Jumpers, Weavers and Touch and Go as well as 2 Novice Gamblers legs.

Wow….what a year!! Eddie and I started our journey down the agility path a short 13 months ago. In that relatively short time, he has continued to amaze me with his love of and talent for the sport. To date he has earned his UAGI and UAGII titles in UKC Agility, (and is only 18 points shy of getting his UACH), his U-CD, and his Canine Good Citizen
certificate. In NADAC agility, he has achieved his Novice and Open level titles in Regular Agility, Gamblers Jumpers, and Weavers. While we’re having a bit of trouble getting that last Novice Touch n Go leg and that last Open Gamble, he finished his Elite jumpers title, and got one leg each in Elite Tunnels and Weaves in Shawnee recently. We still have two NADAC trials to go this year, so hopefully we’ll be working on NATCH points by early next year. Thank you Maureen Kelly for introducing me to this wonderful agility venue!! It is totally addictive, and I’m thoroughly hooked!!

My proudest moment this year however was his performance at the Paws for Peppers fun match in September, where he concurred the Clean Run Ultimate Weave Pole Challenge in 17.1 seconds, barely missing the Rat Terrier world record time of 16.6 seconds. He won over 25 other dogs, including several very good border collies!!

And then there is little Kodi, my Papillon puppy. After suffering an intussusception and subsequent surgery in May, has come along quickly in his training. He won his first two Jumpers legs at our trial in Kellyville this fall , his very first trial. I expect to have some fun times with him next year.

We start AKC agility in January and I’m hoping we can achieve the same level of success in that venue as we have everywhere else.

It goes without saying that we could not possible have achieved any of this without the help of many good friends at TDTC. Thanks Chris, Bob, Paul, Maureen, Richard, Kim, Mary, Larry and every one else for being such patient teachers. 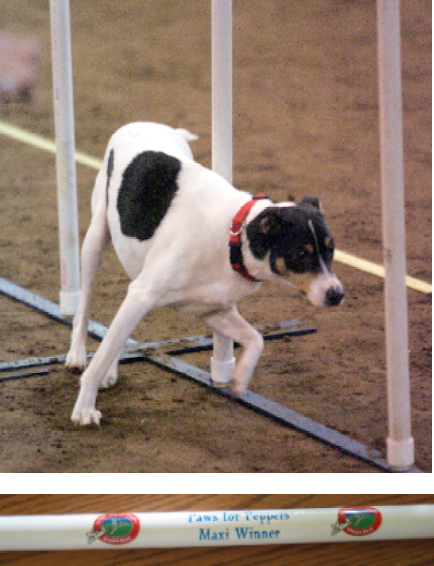 It has been for Marillyn and Me,
A very sad day.
The love of our lives, Brianna, Has passed away.
We loved her so very, very much,
Our saddened hearts have really been touched. She ran and played and slept in our bed,
In the morning’s she barked. “it’s time to be fed”. She was so cute, and very funny,
And loved for us to rub her tummy.

We had her for ten and a half wonderful years, Every time we think about her we shed tears, We are trying to look on the bright side, and be happy we had her so long.

I know she is in heaven,singing her only song. Sleep in heaven our little pal,
It’s time to say farewell for now.

Although Brianna didn’t like obedience training, she loved to show off for my puppy classes. She sang to only one tune, “Somewhere Over The Rainbow”. She was my trick dog, and shook hands, rolled over, and before she got sick I was teaching her to get a kleenex when I sneezed, and she was doing very well with that. I am concerned about Baxter as he and Brianna were soul mates, and he has been grieving. The one good thing is that Brianna died on her own and I didn’t have to make the decision to put her down. She was the sweetest dog I had, always wanting to be on our laps. I know we will meet again over the Rainbow Bridge.