I want to thank Bill & Judy Spens, Mariann Duca, Lorrie Russ and Jeri Hajek. Without Bill taking the entries along with filing the results, Judy lining up the ribbons and trophies, Mariann doing Day-of-Show entries and the computer work, Lorrie getting the volunteers and Jeri rounding up the food these events could not take place. As you can see there is a huge amount of time and effort prior to, during and after to ensure that these events run smooth. Please help me by telling them “Thank You” when you see them.

Without each of you volunteering these events could not take place.

The Colors of Freedom (A Soldier’s Prayer)

The red is our blood, the white is our bandage, the blue is our veins red white and blue. Three colors, three answers. All the same. Freedom doesn’t come free.

The American flag drapes over a coffin, as it’s removed to be folded these thoughts come to mind. On the first fold, I think of the day you were born, and who could forget your first word and toddling steps. Each fold brings a new memory, your first day of school you cried as I left. You could hardly wait to turn sixteen to start driving and dating. I was so proud of you the day you graduated from high school, you got a job and saved enough to buy a car, you fell in love and before too long you were married. Then came the birth of your first child and way too soon you were gone. As the flag is handed to me, I look down and all I see is stars and I realize how many stars have fallen.

Ed was born in Portsmouth, Ohio, on May 14, 1932, to Arlona Lyons Bechtel and Orville Bechtel. He died on January 8, 2014, in Frederic, Wisconsin. He is survived by his wife of 53 years Mary Ellen Bechtel, and the joy of his life, daughter Amy JoAnne Bechtel Gau, and her husband Steven Gerard Gau.

Ed grew up and attended school in Grandview, Ohio, a suburb of Columbus. During his growing up years, he was very active in school and musical activities. He played several instruments and was a band member. In his later years of high school, he and a partner performed a dancing, singing, comedy act for various clubs (He’d also taken dancing lessons for years. It was his mother’s idea—she teased that she wanted him to be like Fred Astaire).

He was a proud alumnus of Grandview High School, Miami University of Oxford, Ohio, and The Ohio State University in Columbus, Ohio. He was and is a member of Phi Kappa Tau fraternity. After his college years, he served in the U.S. Army during the Korean conflict.
Following his service in the Army, he moved to Tulsa, Oklahoma, and joined the McDonald Douglas Aircraft manufacturing and maintenance facility in their electronic development and installation division.

After several years, he left McDonald Douglas to form his own electronic sales and repair company in Tulsa. He was in this business for many years, and sold it upon retirement. After his retirement, he worked part-time at Southern Agriculture in Tulsa.

Ed always had a long-term love of dogs (really all animals), and had owned and trained many collies during his lifetime. For many years he had been a very active member and trainer of the Tulsa Dog Training Club (TDTC). He and other members of the club devoted a great deal of time helping the Tulsa Dog Training Club complete a large new facility for dog shows. This larger building allowed for an increased number of training classes, and the effort helped the club gain an increased national presence in the dog training world.

His collies excelled in obedience, agility, herding, and therapy work. He showed his dogs all over the U.S. and Canada. Lots of travelling and friendships developed in the dog show world. He passed on his love of the breed to his daughter (Amy), who among other things is a collie breeder and dog show judge.

Ed’s collies were so well trained that they became the go-to dogs when television and other advertisers needed dogs for commercials. One of Ed’s nationally top rated winning dogs appeared in over 150 commercials for an ad agency.

Ed’s collies were well-known for their therapy work. Among the therapy assignments, Ed and one of his collies were included in weekly rehab visits at Hillcrest Hospital in Tulsa, working with head injury and stroke patients. Two of his dogs were also regularly scheduled at St. Francis Hospital in the children’s area. Many nursing homes and school classrooms were entertained by Ed’s dogs.

Nationally, Ed has been a member of the Collie Club of America (CCA), and an early and active member of the American Working Collie Association (AWCA).
While living in Tulsa, Ed was a member of the Kiwanis Club, focusing on outreach programs with high school students.

In 1997, Ed and Mary Ellen moved from Tulsa, Oklahoma, to Frederic, Wisconsin. They had been spending summers at their cabin in Polk County, and loved the area so much they decided to make Wisconsin their home. Ed continued to train his dogs in the back yard and around town. He taught some beginning obedience classes for the Community Ed programs in Frederic, Luck, and Siren.

Ed and Mary Ellen were active members in their Catholic parish in Tulsa (Church of the Madalene), and continued to be active at St. Dominic in Frederic. Ed served as usher at services, doing yard work for the parish, and was a member of the Knights of Columbus. He enjoyed being part of the Knights’ crew that helped with Habitat Humanity Homes; fund raising activities that benefited the mentally and physically handicapped in Polk and Burnett County; and anything that the Knights did to improve the community.
As you can see, he was a pretty busy person during his life, but he always had time for his family, his church, and his beloved animals.

He always said, “Spell dog backwards, and you’ll see what is important in life.”

From Jill Perry:
I remember Ed Bechtel as a very hard working, loyal TDTC member with lovely calm collies. Years ago when going to Paw Pal visits to mainly Care Centers we would always have tricks to perform for the people. One that got lots of attention was when he would put his 3 collies on a down stay in a row spaced several feet apart with their heads down and then I would call my poodle, Sooner, to jump over all three. The collies never moved. The microwave in the break room was donated to the club by Ed when his father passed away. (If it is still there).When he moved to Minnesota to be closer to his daughter he was missed by all. Rest in peace, Ed, and train all those dogs at the Rainbow bridge for us. 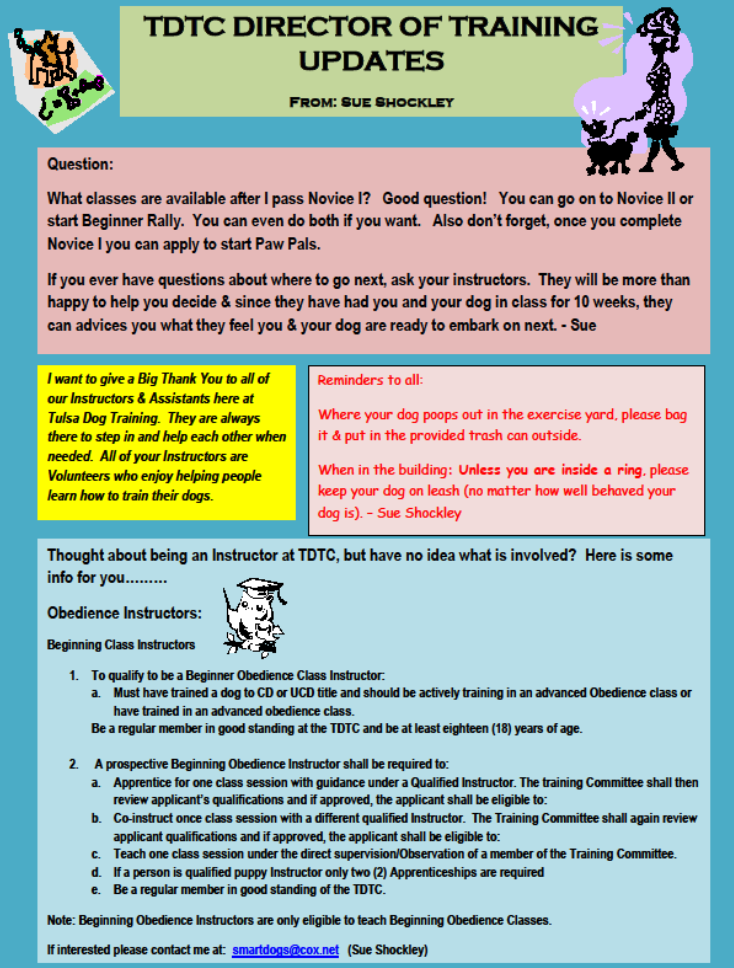